Japanese Religions
Mitarashi Matsuri, an annual celebration, is held at the historic Shimogamo Shrine in Kyoto. The festival, which is held in late July, is scheduled to fall eighteen days before the traditional date which marks the onset of autumn. Each year river water is diverted to create a knee deep pool of water in front of the shrine to Mitarashi, a kami believed to protect against the plague and any misfortune. Hundreds of people descend upon Shimogamo Shrine for this festival, some believing that by wading through the water they will be blessed by Mitarashi with good health while others attend it as a fun summer activity.

Our previous visit to Shimogamo Shrine had alerted us to this upcoming festival, one that I had heard about from a friend who was in Japan the previous summer. The exact details regarding the festival were a bit fuzzy - we were not exactly what was to be expected by those who participated in the festival. The symbol of the festival, a foot, led us to affectionately call it the "foot festival" while we were in Kyoto. Since I was a small child I have suffered from severely flat feet which my orthopedic surgeon attempted to remedy when I was five. Unfortunately the surgery did not garner the desired results and since then excessive walking has been, at the very minimum, uncomfortable. Breaking my leg in February of 2010 only exasperated the problem and I found myself overcome with pain more than one day due to all the walking during the trip. For these reasons I was determined to take part in the "foot festival" after I learned it would take place while we were still in Kyoto.

We arrived at the shrine around dusk with the crowds - parents accompanying their children in jinbei (summer festival dress), groups of young woman dressed in colorful yukata (cotton kimono) and young couples content to stroll along the pathway lined with food vendors and games. Our group parted ways - only a few of us were interested in participating in the festival while the rest ventured out amongst the brightly colored food stalls. After each paying 200 Yen (about $2.30) we were handed a plastic bag for our shoes and a small white candle. Once shoes were removed and pant legs rolled up, we ventured under the arched bridge into the river. The river had been redirected into a small area in front of the shrine; the pristine water colder than I could ever imagine. Within minutes the pain in my feet dissipated, not because of divine intervention but more likely because my feet and legs were numb due to the excessive cold. I lit my candle and carefully proceeded forward towards the shrine. The water was slowly becoming crowded - women holding their skirts above their knees, men with their pants rolled up high and little girls pulling their yukata up to their waists. I placed my candle on a candle holder in front of the shrine and posed for pictures with a classroom as evidence that we took part in the experience (Dr. Roemer also joined us). Eventually we left the water and dried off our feet, putting on our socks and shoes and moving on to the next part of the festival. Men with ladles were filling small cups full of crystal clear water, "foot water" as my classmate called it - quickly we both swallowed a cupful, I imagine we both were thankful it did not taste like "foot water". I then purchased an omamori (amulet) depicting feet to keep with me and two ema (prayer plaques), cut into the shape of feet. On one I wrote my wish to the kami and the other I tucked into my purse as a souvenir. Before we left the shrine area I placed my ema into a container full of water in front of the shrine, hoping the kami would hear my request. I broke off from the crowd in the festival and headed back to the main gate of the shrine where the lanterns illuminated the night. The chattering of the crowds filled the air and the aroma of grilled food beckoned festival goers. We reunited with the rest of the group and ventured out into the festival for a snack before heading back to the hotel, exhausted after another long day. 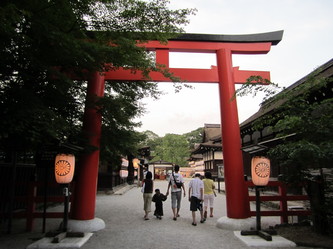 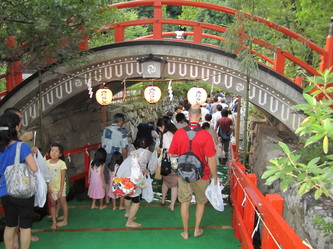 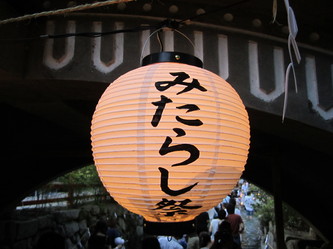 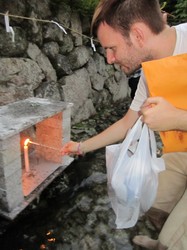 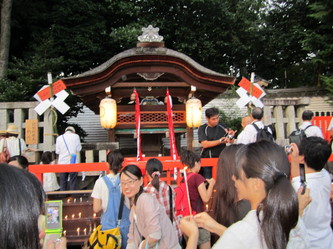 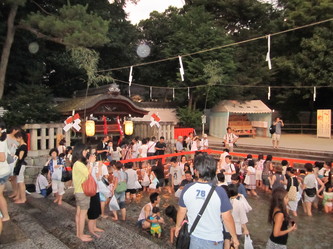 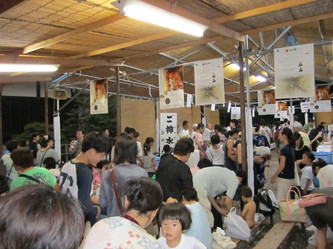 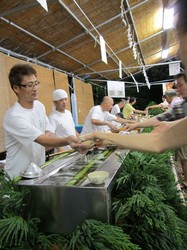 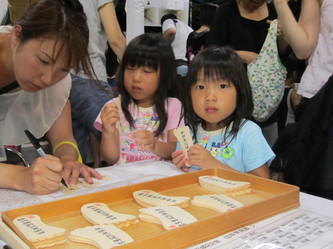 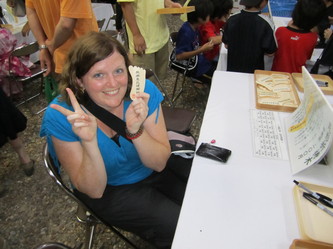 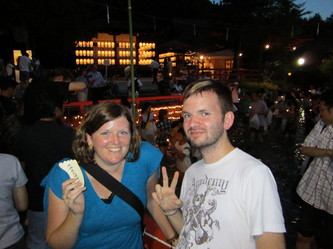 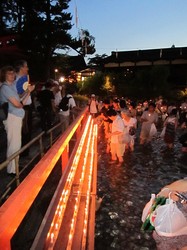 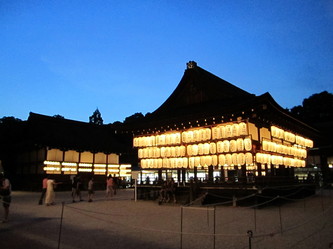 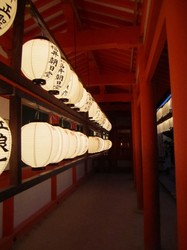 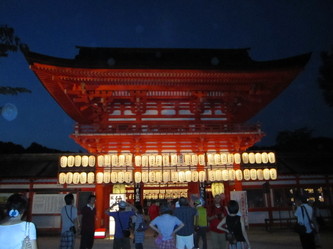 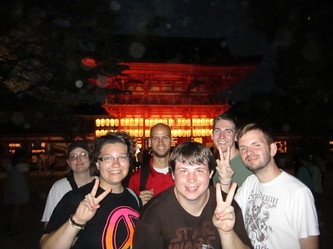 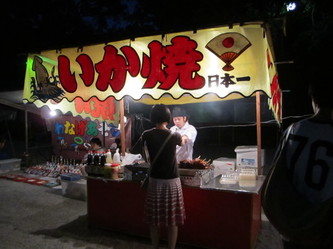 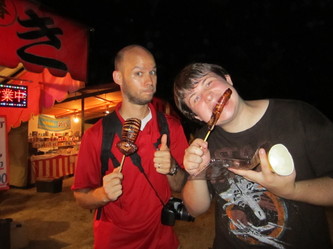 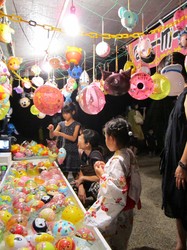 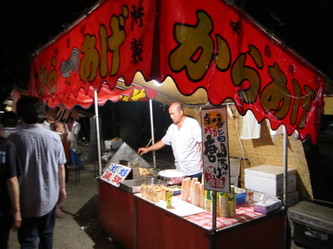