Japanese Religions
The ongoing goal of these courses was to teach others about Japanese religiousness. One of the three ways the Fall 2010 class accomplished these goals was by giving presentations about Japanese religions and about experiences students had in Japan (the other ways are this website, our virtual shrine and temple, and our blogs). The original group of students from the summer trip gave a presentation for Emerging Media Initiative about our trip to Japan, our class projects, and our application of technologies used in creating the Website and Second Life (click here for the video). Five students from the new class gave 5 presentations at 2 local high schools to teach about different aspects of Japanese religions and religiousness.

In the first high school presentation, the topics discussed focused on the central idea of describing creation mythologies in Shinto and the different perspectives one could take when examining those myths. After giving an overview of the general stories of the Kojiki and Nihon Shoki the different perspectives we discussed were feminism, social constructs due to creation mythology, and tales of incest in creation mythology.  The topic that followed the Japanese creation mythology was life cycles and the ideas presented in the following statement: "Born Shinto, Marry Christian, Die Buddhist." The presenters each discussed a part of the phrase and added the topics of cyclical rituals and festivals.  The overall process of making presentations for local high school students was a valuable learning experience for both the high school students and the college students who presented the information.

To continue to garner publicity and spread the news of the Japanese Religions immersion project, starting at the beginning of 2011, several students presented at different symposiums and discussions across campus. At Ball State University College of Communication, Information, and Media's Kaleidoscope Symposium 2011 - a poster session focusing on diversity and a students ability to articulate themselves to judges - the grand prize "Best in Show" award went Tayln Cox and the Japanese Religions project. A recap of the symposium can be found on the Sponsored Programs Office blog,  along with a video from the symposium floor. Students from both semesters of the projects were also involved with the 2011 Student Symposium and the Department of Philosophy and Religious Studies Student Recognition Day. 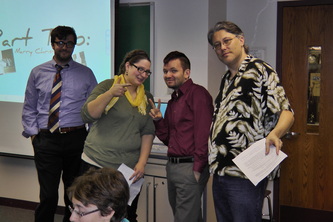 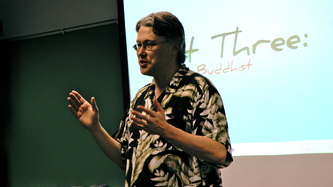 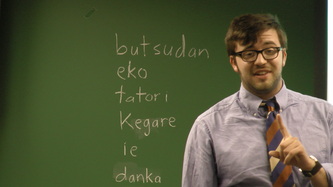 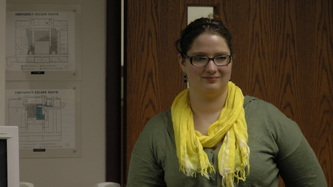 For a video summary of the projects that resulted from the Japan trip, click here.
Written by: Tayln Cox
Pictures by: Dr. Roemer
Edited by: Tayln Cox