Japanese Religions
We returned to the temple after a day of traipsing around Tokyo, visiting Yasukuni Jinja and Senso-ji, a shrine and temple, both well-known and large. Taisoji, on the other hand, was a small, intimate temple. It was not a destination for tourists and was removed from the hectic life of Tokyo. As we walked towards the temple the sounds of drumming filled the air, and once we entered the temple grounds we could see that the odori (dance) had already begun. Men and women dressed in yukata (summer kimono) moved slowly with the beat of the drum, waving their arms in front of them, a few graciously but most in a clumsy manner. This was not a professional dance troupe but community members partaking in an old tradition. Throughout the night, the number of dancers increased as the festival became more crowded. It became apparent it was not necessary to know the dance, as many participants were young children learning the steps by observing the others. The festival had a particularly merry nature, children ran around chattering with friends, families strolled together, young women dressed in yukata greeted each other and young men loitered near the food stalls. The warm air was filled with the smells of grilled chicken skewers and yakisoba, both popular festival foods. Children crowded around the game stalls, while parents stood nearby talking. The dancing, in the center of the complex, continued on accompanied by the boom of the drum and soft singing over the speakers. As we left the temple grounds the sounds of the drums followed us onto the streets of Shinjuku, a fitting ending to our first night in Japan. 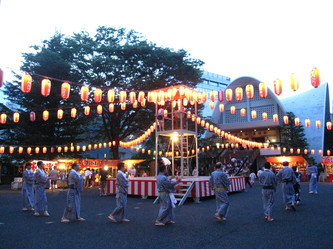 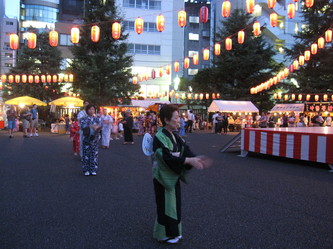 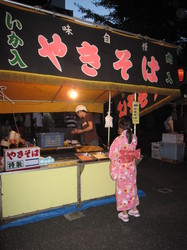 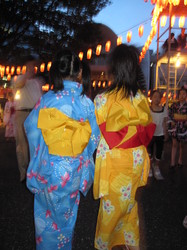 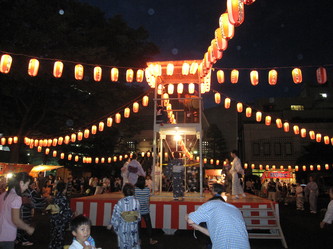 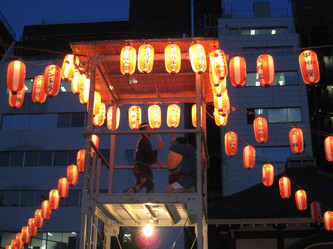 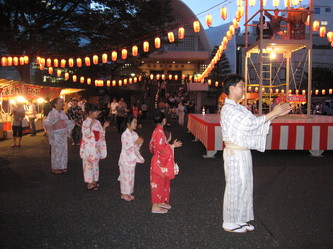 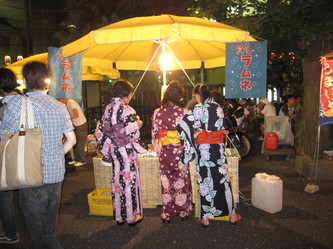