The parade lasts several hours as each hoko and yama is pulled through the streets. After the parade, each float cart is returned to its neighborhood where it is immediately dismantled to be stored for the next year. That evening, the three mikoshi at Yasaka Shrine are removed and brought into the streets (see second video above). The mikoshi parade then takes place, with men carrying each mikoshi, which weigh thousands of pounds, in opposite directions around the city in order to entertain and appease the kami and let the people interact with the deities. At the end of the evening, around 10:00pm, the mikoshi parade ends at one area on a major road in Kyōto, where the mikoshi are stored for one week to be with the residents of the city. Once the week is over, the mikoshi are taken back to the shrine, and a transfer ritual is performed by the head priest of Yasaka Shrine. During this ritual, objects representing the kami are placed back in the shrine. More rituals are performed to finish out the month-long celebration, after which the city returns to its normal state, and preparations begin again for the next year.

The experience at Gion Matsuri is one that I will never forget. I don't think I could forget it, even if I tried. We arrived in Kyōto just in time to take part in the the last three days of the pre-festival celebrations and the float-cart parade. After relaxing a bit at our apartment, we made our way toward the downtown. As we walked down the small streets, few people were around us, but this didn't take long to change. Once we were at the first float-cart, we were surrounded by people. We made our way around the neighborhoods, looking at various carts, one of which did not have tapestries hung yet. This was an excellent chance to see the inside of the cart, which is entirely wooden and held together with nothing more than rope and other pieces of wood. The structure of the carts is something to marvel, and I loved seeing the inside of a cart to view how the people built it. After visiting a few carts and their amulet stalls, we decided it was time to venture into the food and game area to grab some dinner. As soon as we stepped into the stream of people, we were carried passed stalls too quickly to even see what they had. Thousands of people lined the streets, and we were just a few among the sea of bodies.  I've never had any experience even near this, and it was quite exciting. I remember laughing and making jokes with other group members about what we were experiencing because it was amazing. Eventually, we were able to get away from the crowds and head back to our apartment for some sleep before the next day.

We were up bright and early to make it to the beginning of the float-cart parade, and although we were not in a great position to see the chigo cut the sacred rope, we were still in a decent position to view some of his movements and the actual cutting of the rope. Once the rope was cut, the floats were off. Of course, they were off at an extremely slow pace because people have to pull them, but the parade was definitely underway. We walked to different positions of the parade in hopes of seeing different portions of it and stood for quite some time watching the hoko, which are on fixed wheels, turn corners. It took nearly 15 minutes, perhaps even more, for the hoko to turn a corner, and every time one did, the people cheered at the sight. It was extremely hot and humid, so with that and all of the bodies, some members of our group started to feel ill, including me. We went back to the apartment, and those who felt well went back out to check out the carts being taken apart. After they returned, we got ready to go back out and watch the mikoshi parade. Unfortunately, we could not get a very good view of Yasaka Shrine or the mikoshi being taken out of the shrine, but we did make our way to a side street where we had a great view of one of the mikoshi on its parade route. The roads in Gion are narrow, and we felt the force of that as we were pressed up against a gate while the mikoshi passed us with dozens of men carrying it exchanging with other men, shouting, and shaking the mikoshi up and down. That portion of the parade was excellent because we were able to see the entire process of carrying 3,000 pound mikoshi up close, and I loved every moment of it. Later, we were on the bus returning to our apartment, and we caught the tail-end of a mikoshi's route as it was taken to its place on the street, where it would stay the next week. Gion Matsuri was crazy, to say the least, but it was amazing to experience, and there will never be anything quite like it.
Below are some of the many events that make up the month of Kyoto's Gion Festival. They include pictures from "Yoi Yama" (July 14-16)--the evening fun events before the main parade, the main parade (July 17), the portable shrine parades (July 17 and 24), and the dismantling of the float-carts (right after the main parade on July 17). 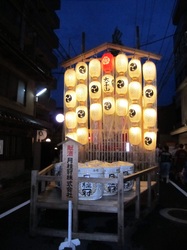 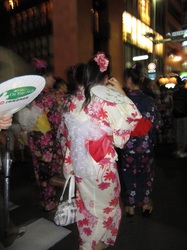 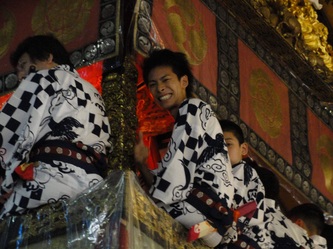 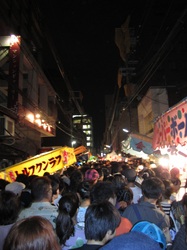 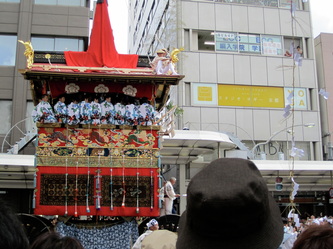 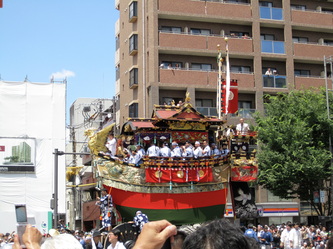 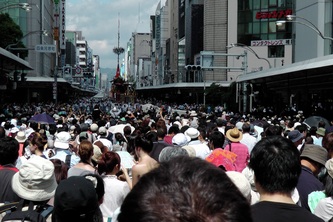 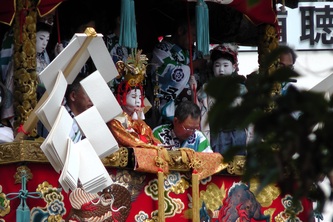 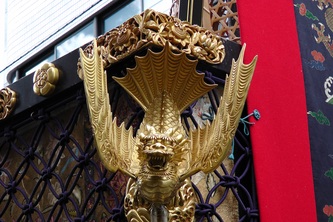 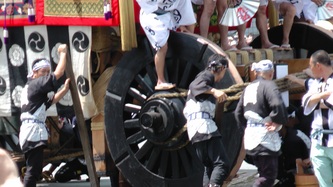 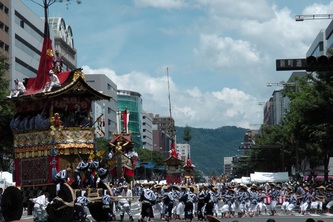 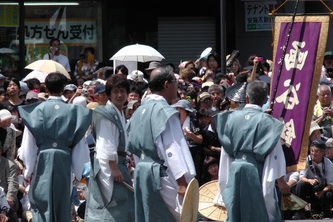 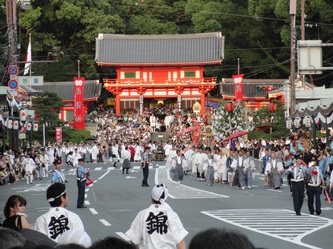 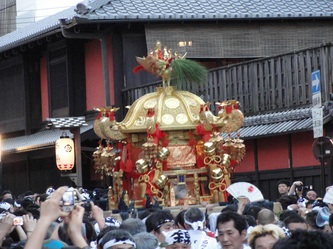 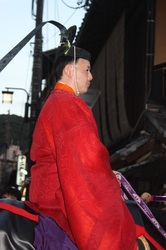 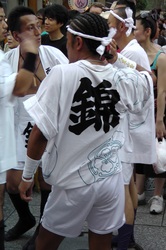 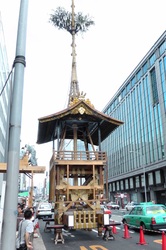 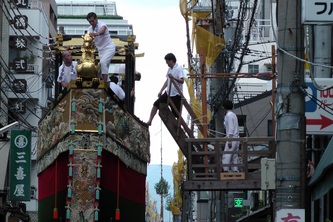 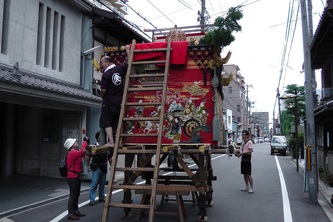 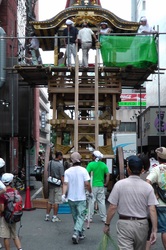