Kinkaku-ji, Temple of the Golden Pavillion, can be found in Kyōto, Japan. The history of the Golden Pavilion is long and full of trials. During the Kamakura period (1185-1333), the land was originally owned by an aristocrat named Kintsune Saionji. On the land, he built a villa, which was noticed by the shogun Yoshimitsu. Yoshimitsu had the pavilion built in order to store relics of the Buddha, including a Shakyamuni triad on the first floor, an image of Kannon on the second, and other sacred relics on the third. Eventually, Yoshimitsu handed his shogun position to his son and took Buddhist orders. He lived in the Golden Pavilion until his death at the age of 51, after which his son converted it into a Zen temple and renamed it Rokuon-ji (Deer Garden Temple). All of the buildings surrounding the pavilion were burned down during the Ōnin War (1467-1477) except for the Golden Pavilion. It was, however, burned down by a monk in 1950, and the current version was built in 1955. The pavilion is built out of wood with the top two floors covered in gold leaf. Portions of the inside of the pavilion are also covered in gold leaf, and it is this appearance that gives it the name of Golden Pavilion, which it retains to this day over Rokuon-ji. The Golden Pavilion is designated as a UNESCO World Cultural Heritage Site.


As I walked up to the Golden Pavilion, I was met with a beautiful sight of pure gold. I had seen pictures of this temple through various classes and internet resources, but that could not prepare me for the image I saw after passing through the gate. The Golden Pavilion is surrounded by a pond, giving it a more auspicious appearance since we can only view it from afar. We were not allowed in, which was disappointing, but even being able to see the pavilion was a treat. Another element I remember well at the pavilion was the amount of people. The Golden Pavilion has become quite the tourist destination, so we were only a few of the hundreds of people to see the pavilion that day. It was difficult to take a picture and not have someone accidentally walk in front of the camera. This is primarily due to the gravel path that visitors have to take around the pavilion, which is smaller and gives visitors less room to move around. The path does create a feeling of intimacy, though, that can be missing from other temples and shrines that have large, sprawling grounds. As we made our way from the pavilion, we ran into a small statue with a rock in front that had a divot to throw coins into. If the coin landed in the divot, the person could make a wish and it would come true. I tried twice, throwing two ten yen coins at the rock, and finally made it into the rock. I made my wish, and at this point, it still hasn't come true. Then, after we made it to the end of the path, we had the chance to participate in a very short tea ceremony, in which we were given a small sweet and a cup of tea. The sweet was very good, and the tea was delicious. It was bitter, as tea ceremony tea is, but after drinking tea for days on end in Japan, the bitterness was not unpleasant and indeed quite good. Five of us participated, and it was a nice experience to cap off our visit. 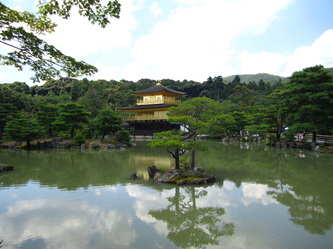 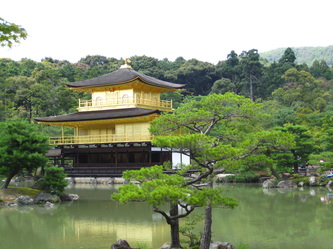 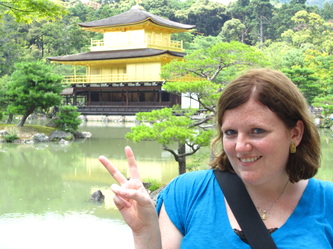 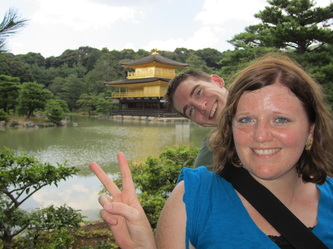 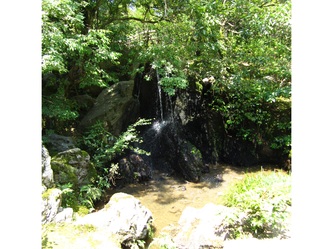 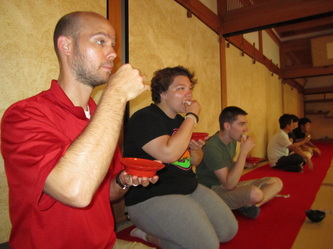 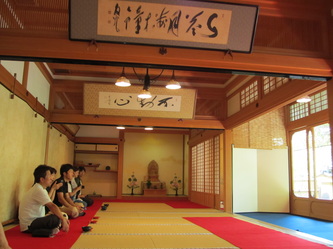 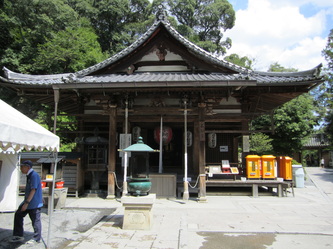 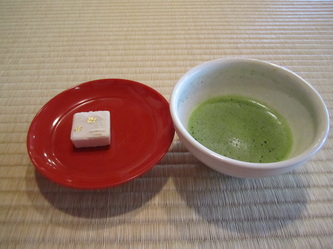 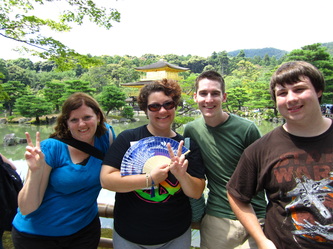 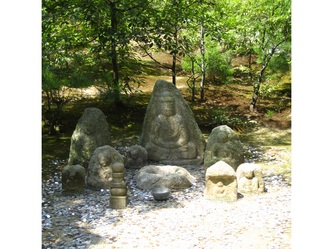 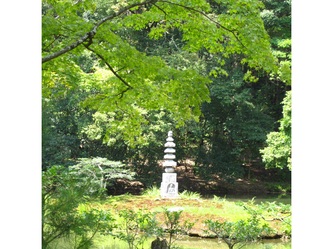